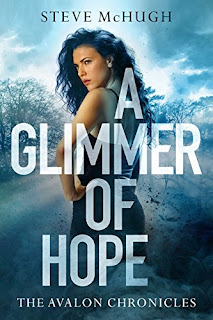 SYNOPSIS:
Layla Cassidy has always wanted a normal life, and the chance to put her father’s brutal legacy behind her. And in her final year of university she’s finally found it. Or so she thinks.
But when Layla accidentally activates an ancient scroll, she is bestowed with an incredible, inhuman power. She plunges into a dangerous new world, full of mythical creatures and menace—all while a group of fanatics will stop at nothing to turn her abilities to their cause.
To protect those she loves most, Layla must take control of her new powers…before they destroy her. All is not yet lost—there is a light shining, but Layla must survive long enough to see it.


REVIEW:
The first book in a new series by Steve set in the same Universe as his Hellequin tales.  As you'd expect its full of action, has a great cast (some of which will be familiar to fans) that you'd like to go out drinking with and brings a whole new fresh angle to what has gone  before.

Back this up with dialogue that flows smoothly, cracking pace as well as an arc that shows a lot of thought so that it flows smoothly and delivers with some great gut punches, all round demonstrates that this is an author with a hell of a lot to bring to fans.  Magic. 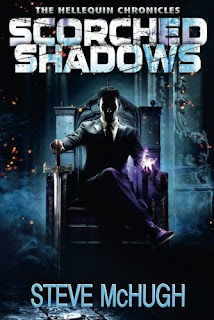 In the final chapter of the Hellequin Chronicles, secrets will be revealed, friendships tested, and destinies fulfilled.
Avalon is under siege. A shadowy cabal, headed by a mysterious figure known only as “My Liege,” has launched a series of deadly attacks across the globe, catching innocent human bystanders in the crossfire.
Emerging from the debris of battle, Nate Garrett, the sixteen-hundred-year-old sorcerer also called Hellequin, and his friends must stop My Liege once and for all. But powerful forces stand in their way. To save Avalon, they will need to enlist the help of Mordred, once Nate’s greatest nemesis, now his most formidable ally. But Mordred is grappling with a dark prophecy that could spell Nate’s doom…
The fate of the world hangs in the balance. Even if Nate can halt the war, will there be anything left worth saving?

REVIEW:
Ah a delight on my reading calender, a new Steve McHugh's novel who I was pleased to say I discovered luckily through a writing forum hosted by another author.  His writing brings wonderful myth and mystery together as we have stories with Arthurian enchantments blended with otherworldly creatures in the modern world that just sings of originality and for me its a series that keeps giving with each new outing.

I love the characters, the way they all feel realistic and each have their own individual voice to bring to the fore as their efforts have consequences in their world that may be quite unforseen.

Add to the mix a great understanding of pace, some wonderful turns of phrase alongside cracking action sequences and all round I was a more than happy reader.  I can't wait to see what Steve's new series has in store for me.
at April 02, 2018