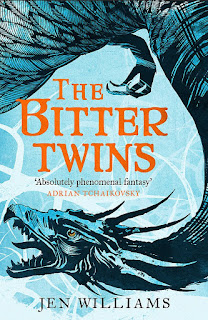 SYNOPSIS:
The Ninth Rain has fallen. The Jure'lia are awake. Nothing can be the same again.
Tormalin the Oathless and the fell-witch Noon have their work cut out rallying the first war-beasts to be born in Ebora for three centuries. But these are not the great winged warriors of old. Hatched too soon and with no memory of their past incarnations, these onetime defenders of Sarn can barely stop bickering, let alone face an ancient enemy who grow stronger each day.
The key to uniting them, according to the scholar Vintage, may lie in a part of Sarn no one really believes exists - a distant island, mysteriously connected to the fate of two legendary Eborans who disappeared long ago.
But finding it will mean a perilous journey in a time of war, while new monsters lie in wait for those left behind.
Join the heroes of THE NINTH RAIN as they battle a terrible evil, the likes of which Sarn has never known.


REVIEW:
I love a fantasy book that takes me not only on a journey but also throws in self discovery for the characters about their own needs as well as desires and how they learn to live with the consequences of their choices and for me Jen is an author that has delivered on this time and again.

Starting not long after the first outing in this series (The Ninth Rain) we get to see how the characters have been changed alongside how they're coping now that they've seen exactly what lies in wait for them.

They're strong, they have flaws and for me, I just love it when new cast is added to help create new tensions as well as possible misdirection's within the series.  All round a cracking read with top notch prose and dialogue that just trips off the page.  Magic.