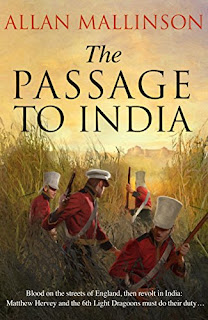 In England, the new government is facing protests against the attempts of the Tory-dominated House of Lords to thwart the passing of the Reform Bill. In India, relations are strained between the presidency of Madras and some of the neighbouring princely states.

Having taken command of the action in Bristol to restore order after one of the bloodiest and most destructive riots in the nation's history, Lieutenant-Colonel Matthew Hervey is out of favour with the new government. But then his old friend, Sir Eyre Somervile, offers him a lifeline. Somervile has persuaded the Court of Directors of the East India Company to approve an increase in the Madras military establishment. Hervey and the 6th Light Dragoons are sent to the princely state of Coorg. The Rajah is in revolt against the East India Company’s terms and Hervey’s regiment is called upon to crush the rebellion. With the stakes raised by an unexpected visitation from his past, for Hervey the question is whether he and his men will get out of this brutal war unscathed?


REVIEW:
The thirteenth  book in the series and whilst some would say that its a number unlucky for some, it definitely is, in the case of Matthew Hervey and his men.  WIth top notch action sequences, the clever use of scene setting and of course a plot with all sorts of twists and turns the reader is in for a treat.

Add to this, the fact that the author brings the exotic nature of India as well as concerns of the inhabitants against these foreign invaders as well as a whole host of interesting supporting cast all round makes this a wonderful read.  Great stuff.