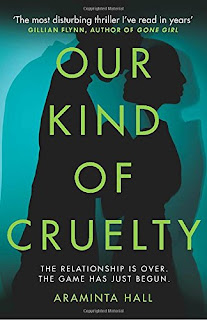 SYNOPSIS:
Mike and Verity have a special game. The Crave.

They play it to prove what they already know: that Verity loves Mike. That she needs Mike.

Even though she’s marrying another man.

Now Mike knows that the stakes of their private game are rising.

This time, someone has to die…


REVIEW:
To be honest I love a book that tries to do something a little different and at times its quite fun to see the thriller from the villains point of view as the events that are going to be central to the plot unfurl.

Its definitely something a little quirky and whilst for me the second half of the book was very pacey with little pause for breath, its the first half I found the better of the two as I liked the way you got to "hear" the characters inner thoughts which helped explained how he worked and gave you something to get hold of to keep you interested.

Yes the second half dealt with more of the courtroom side of things with a few twists and turns but for me, it was the first half I enjoyed way more as for me, the tale sadly fell into a certain pattern that was almost too formulaic.  All round it was an OK read due to the later part of the book but for me what I'll remember it for more was that deliciously creepy feeling of being behind the perpetrator's eyes.