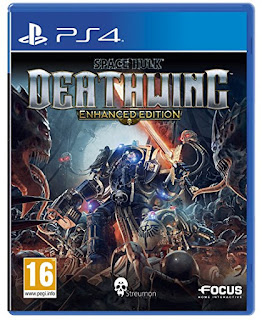 SYNOPSIS:
Space Hulk Death wing Enhanced Edition is a First-Person Shooter based on Games Workshop's cult classic board game set in Warhammer 40,000 universe. Expanding upon the original game, and featuring a host of new content, new features and a richer multiplayer mode, the Enhanced Edition is the ultimate Space Hulk: Death wing experience for the first time on console.


REVIEW:
OK, so I ordered this title as I have fond memories playing Space Hulk (the games workshop board game) in my youth and i felt hat this would rekindle a bit of nostalgia for me whilst adding something with a bit more flair to those long lost days, however whilst expecting it to be a reboot of an older title, I wasn't expecting the world from it.

Which was probably a good bit of forethought on it on my part as sadly whilst the graphics had been upgraded a lot of the game remained with a huge amount of problems:
1)  There were quite a few game crashes and whilst it didn't happen to often to me, I have heard of a good few people having to do full system reboots.
2)  The AI:  Sadly the brothers who were with you were pretty dense and got in your way more than helped.  This could easily have been avoided with perhaps the addition of either other players or an update on their mobility.
3)  Controls:  The controls for this were a bit clunky and weren't very intuative often causing overshoots and really slow turns so taking fire was unavoidable.

All in, whilst it does have some reasonable graphics, managed to get the look of the space hulk right, overall this game would have been better had it been taken back to basics and perhaps undergone more rigorous testing and perhaps utilised other titles idea's such as ducking behind cover etc.  Its OK but against a lot of other shooters out there, this one is sadly lacking.  A great shame.
at June 06, 2018