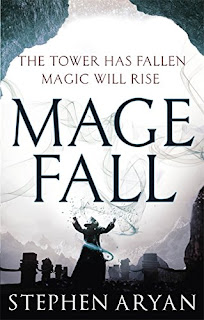 When magic is feared, the mages must learn to fight for themselves in this powerful sequel to the standout epic fantasy Mageborn by Stephen Aryan.

The land is in turmoil. Mages are hunted by men and gods alike. Even their own kind betray each other in the name of safety and protection.

With their last refuge fallen, two young mages must conspire against a god to show the world that their abilities aren't a curse; they are the only way to ensure lasting peace. Under the threat of anti-magic fanatics, Wren struggles to find her place as a leader and to keep her people safe as they build a new home. While Danoph searches for answers on a spiritual journey, determined to find out who he really is and where he came from in an effort to calm the coming storm.

Their world has turned against them, yet only they can save the world.


REVIEW:
The second book in the series and to be honest you can tell that its the middle  book in the trilogy because it feels to have a lot of filler within the pages to me.  That's not saying its bad, the writing is solid, the characters are definitely interesting but for me its the pace that leads me to feel this way as it seems to meander in some places.

All in, I am still enjoying the series and this book has helped add a little extra flavour to the world as well as allowing more character development and I suspect that the way that these events will unfurl will end up with one hell of a climax where we discover that the villain isn't quite as black as we suspect.