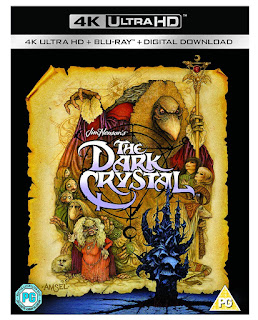 SYNOPSIS:
In another time, The Dark Crystal was the Balance and Truth in the Universe, but was destroyed dividing the world into two factions: the wicked Skeksis and the peaceful Mystics. Now as the convergence of the three suns approaches the Crystal must be healed or darkness will reign forever. It is up to Jen, the last of his race, to carry out the prophecy that a Golfing will return the missing shard of crystal and destroy the Skeksis’ evil Empire. But will Jen be up to the challenge of battling the unknown?
Special Features:

ALL-NEW: “The Myth, Magic and Henson Legacy” featurette: Go behind the scenes of this iconic film with stories from Lisa Henson and Toby Fraud.
Deleted Scenes
Commentary with Brian Fraud
Picture-in-Picture Storyboard Track
Original Skeksis Language Scenes with Introduction by Screenwriter David Odell
“The World of The Dark Crystal” Documentary
“Reflections of The Dark Crystal: “Light on the Path of Creation” & “Shard of Illusion”” featurette
Photo Galleries
Theatrical Teaser & Trailer


REVIEW:
OK, I have to admit my age here, but I remember seeing the trailer for this when I was young and being a Jim Henson film, thought WOW, whens it out and will my Dad take me to see it.

Well luckily for me (and my twin), he was a huge fantasy fan, had seen the trailer previously to us and made sure we saw it to gauge our reactions to see if we wanted to go (probably so he had an excuse to go like he did with all the Disney films.)

I remember the viewing with great fondness and of course whilst seeing the rich backgrounds, beautifully done puppets alongside a musical score that just transported me away to the world left me with goosebumps from beginning in to end.  But with it coming out on a Blu-Ray Anniverary Edition recently would I still be reminded of the child in the theatre or would it show its age and be something that was better left as a film seen through rose tinted glasses?

Setting down one night, with pizza, ice cold soft drinks and some Ice-cream, I prepared myself to enjoy it all over again, however I wanted to share the experience with fellow blogger Lady E, who after watching the trailer said "No way, the Skeksis are too scary."  (This coming from a lady who was raised watching Video Nasties and Romero Zombie films from the age of 8.)

So whilst she did some reading I got down to business.

When starting I was transported back to this imaginative world and whilst you can tell its an older film the clarity of the picture was wonderful, delightfully presented which when presented with equally good upgraded sound really gave me the whole experience.  OK, so the story was a bit linear and simplistic but it wasn't just about that for me.  It was the way that it brought you in, it was the magic that made you think other worlds were possible and the way that good triumphed over evil even though it seemed like a fruitless quest at the beginning.  I loved it and was pleased that my memories didn't let me down.  I can't wait to share this with my nephews and niece.

Finally add to this a whole heap of other features that will leave you wondering at not only how immersive the world was but also how they managed to achieve so much with the tech at the time and you'll have a disco to treasure that will bring joy time and again.

On a side note, if you are a huge fan of this film Netflix is promising their own Dark Crystal prequel series in 2019 which I hope will be just as good.  (Trailer below.)