FANTASY REVIEW: Echoes of the Hawk 3: The Hyena and the Hawk - Adrian Tchaikovsky 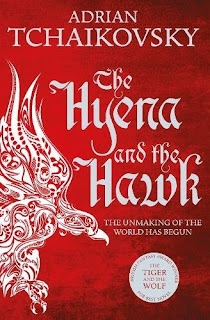 They face a hunger that could consume the gods themselves
From the depths of myth an ancient enemy has returned: the Plague People, whose very presence obliterates whole villages; whose terror destroys minds. In their wake, nothing is left of the people, not their places, not their ways.
On the plains, the warriors and the wise of all tribes gather to confront the aggressor. Loud Thunder leads his great war-host south, even as Tecumet and Asman head north with the Sun River army. With Maniye Many Tracks, they plan to forge a new unity between the tribes such as the world has never seen. But will it be enough to stave off an oblivion that might devour even their gods?
Their adversary’s presence is like a wound in the world, and wakes all the old terrors and evils from the peoples’ stories. But before they can deal with the enemies without, they must conquer their demons within.
The Hyena and the Hawk is the third book in Adrian Tchaikovsky's epic fantasy trilogy, Echoes of the Fall, following The Bear and the Serpent.


REVIEW:
Adrian's always been an author who has not only delivered story arcs interwoven with complex relationships but also given readers cracking prose, action sequences that leave you short of breath and wrapped it all up with believable characters.

Its a cleverly woven set of skills that within its rich tapestry not only gives you a story that is fun for a single read but will pay dividends as you seek to find the little nuances that led events to shape the way that they went.  Add to this good character development and all round I was a more than happy reader.  Cracking.