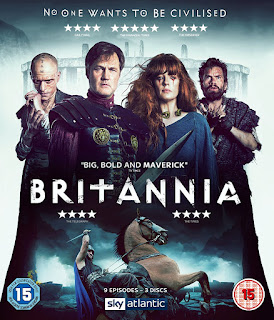 SYNOPSIS:
Kelly Reilly, Zoë Wanamaker and David Morrissey star in this British drama series set in AD43. As the Roman Army prepare to destroy the Celtic land of Britannia, rival warrior women Kerra (Reilly) and Antedia (Wanamaker) find themselves working together to fight off the monstrous Aulus Plautius (Morrissey), the leader of the Roman invasion.


REVIEW:
I missed this series when it was originally on Sky however upon finding out about the Blu-Ray I was more than happy to indulge as I was quite impressed with the cast that they had assembled.

Whilst this isn't a true historical drama, I loved the way that they wove magic into the tale against the might of the Roman Empire.  The way that each character came across as seeking to make their own mark was also delightful with the first episode proving that the show was playing for keeps and that be you a peasant or a king/queen, everyone has to face their own reckoning.

The script was definitely interesting and whilst on the whole it worked well for me, I was a bit at a loss at times when it seemed to move quite quickly from the morose to the comical which on the whole didn't work too well for me.  Yes I could see the need to bring levity to it, yes I could see how they had to use pace to help slow things down or to pick the audience up after a brutal scene but there had to be better ways to do it.

All round, it was a series that I got into the more episodes I watched and with actors bringing their individual characters to life I was left wanting to know more, especially with the cliff hanger that the series was left on for season 2 (which as of the time of writing this has yet to be confirmed as no viewing figures have yet to be released.)  I can but hope.
at April 04, 2018