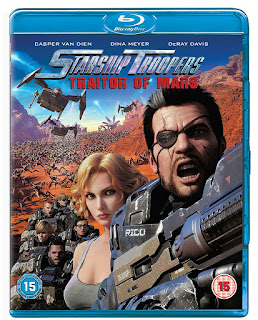 SYNOPSIS:
Johnny Rico is back! C'mon you apes, you wanna live forever?! I have only one rule. Everybody fights, no one quits. The bugs have breached Mars and the Federation's Fleet is too far to help. It's up to us to save the planet. On the bounce, Troopers! The only good bug is a dead bug! Oorah! Casper Van Dien and Dina Meyer return as the voices of Johnny Rico and Dizzy Flores alongside comedian and Starship Troopers superfan DeRay Davis in an all-new military adventure from the writer of Starship Troopers and Robocop, Ed Neumeier.
Special Features


REVIEW:
As a fan of the original film, I've kept up with the other releases in the series and to be honest some have been shockingly bad which sadly left me feeling quite let down, so to be frank, I wasn't expecting to much from this.

Thankfully I'm pleased to say I was more than pleasantly surprised at the whole thing.  I loved the fact that they'd brought back the original actors (although for some reason Dizzy is back when she was killed in the first film) with a solid script giving the mobile infantry the chance to do what they do best, fight and die to free Mars from an unexpected Bug Invasion.

The animation is solid, the script work fitting well and when blended with good voice acting, all round allows you to become fully immersed.  All round a very happy viewer and when you throw in the additional features, it allows you to get so much more from the whole thing.  Cracking.