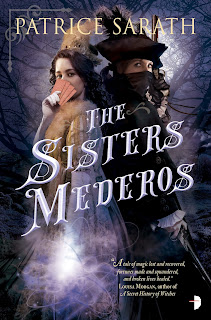 SYNOPSIS:
House Mederos was once the wealthiest merchant family in Port Saint Frey. Now the family is disgraced, impoverished, and humbled by the powerful Merchants Guild. Daughters Yvienne and Tesara Mederos are determined to uncover who was behind their family's downfall and get revenge. But Tesara has a secret - could it have been her wild magic that caused the storm that destroyed the family's merchant fleet? The sisters' schemes quickly get out of hand. Gambling is one thing, but robbing people in the night is another… Together the sisters must trust each another to keep their secrets and save their family.

REVIEW:
An historical fantasy that delivers mystery, double dealing and murder in a tale of vengeance alongside redemption.

Well written with two extremely likeable female lead protagonists who probably wouldn't be out of place in a Charlotte Bronte tale, which when blended wtih a solid supporting cast (some of whom felt like I wanted to spend more time around to see what they got up to, yes Uncle this means you)  and hopefully they'll be explored a bit more in future outings.

Add to this acceptable dialogue and a dash of romantic banditry which when accompanied with well laid plans that allow you the chance to escape into a brand new world full of opportunites.  A fun read and one that will break the monotony of some of the heavier tomes out there.  Cracking.
at April 06, 2018