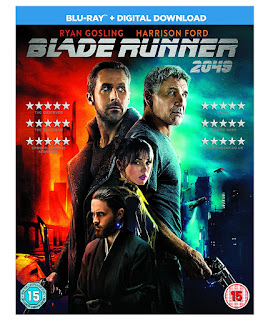 SYNOPSIS:
Thirty years after the events of the first film, a new blade runner, LAPD Officer K (Ryan Gosling), unearths a long-buried secret that has the potential to plunge what's left of society into chaos. K's discovery leads him on a quest to find Rick Deckard (Harrison Ford), a former LAPD blade runner who has been missing for 30 years.

REVIEW:
I have extemely fond memories of the original Blade Runner film with Rutger Hauers final speech being one of my favourites from any film (see clip.)  So hearing that they were making a sequel left me feeling a little cold, worrying that it was going to be a modern cash in detracting heavily from the original with poorer writing and characterisation leaving the viewer with an overly effected title with very little other than 2d cast members.

What unfurled was a film that will probably be controversial and split people into two camps in much the way marmite is, you'll love it or hate it.  Personally I got a lot out of it.  I liked the way we saw Deckard return, older and much wiser and the way that he and Ryan Goslings character played off of each other.

The script was solid and whilst it wasn't wall to wall action, I was more than happy with what I saw.  OK, so in places it did drag but for me, the pace needed to be worked carefully in order to do justice and bring something that many people could easily switch into having watched the original.

All round, for me, a good bit of fun and a title that will be a firm favourite earning a spot of honour on my shelves.
at April 06, 2018