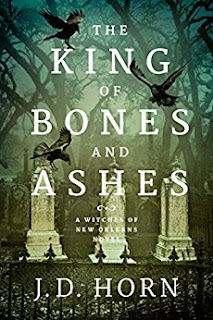 From the Wall Street Journal bestselling author of the Witching Savannah series comes the story of a young witch’s quest to uncover her family’s terrifying history...
Magic is seeping out of the world, leaving the witches who’ve relied on it for countless centuries increasingly hopeless. While some see an inevitable end of their era, others are courting madness—willing to sacrifice former allies, friends, and family to retain the power they covet. While the other witches watch their reality unravel, young Alice Marin is using magic’s waning days to delve into the mystery of numerous disappearances in the occult circles of New Orleans. Alice disappeared once, too—caged in an asylum by blood relatives. Recently freed, she fears her family may be more involved with the growing crisis than she ever dared imagine.
Yet the more she seeks the truth about her family’s troubled history, the more she realizes her already-fragile psyche may be at risk. Discovering the cause of the vanishings, though, could be the only way to escape her mother’s reach while determining the future of all witches.


REVIEW:
Having read the blurb for this book on Netgalley, I was pretty excited to read it, however upon starting it, it turned out to be a book that took quite a bit of time to get into especially when you have quite a bit of backstory that kept interupting the flow as well as the pace which left me as a reader feeling a little cheated wanting to find out more about the principle players rather than having extra elements added which didn't feel required at that point.

It is a story that does have a hell of a lot going for it, trading in the wonderful sense of macabre of the city of New Orleans alongside bringing the culture of magic and hoodoo to the reader that really grips them as events wend their own direction which does give a great creole flavour to the whole piece but for me as a reader, I did feel that perhaps the author needed to break the tale up between characters and would have been better concentrating on fewer with others to add their own dimensions further down the line in a seperate own title.

All round it is a strong start but in my opinion it will leave a number of readers not so sure about trying future outings which from the feeling I've picked up here would be a great shame, especially if the author simplifies some of the arcs within and keeps the pace moving without having to dive back into further pre-story information.
at April 07, 2018