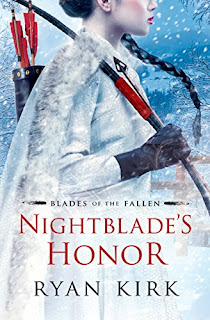 In the riveting sequel to Nightblade’s Vengeance, the nightblades must choose a side, and the Kingdom will either rise again…or shatter into pieces.
With the realm on the brink of war, the once-celebrated blades have become an easy target for the rage of its devastated citizens. The nightblade warrior Asa’s lifelong quest for vengeance is over, but now she finds herself on the run from the people she sought to protect. As Asa forges a new course of action in an uncertain world, her path crosses with that of a young noblewoman.
Mari knows that great opportunity lies in the heart of chaos. If the Kingdom is to rise again, Mari will need support, and she can think of no group better than the nightblades. But the nightblades have been betrayed before, and gaining their trust will not be easy.
Mari wants to save the Kingdom. Asa wants to save the people. Both are willing to risk everything. But do their quests make them allies… or enemies?

REVIEW:
As a reader I love it when an author brings characters who are valued for their skills and abilities over their gender and delivers characters that are fully rounded to face the trials and tribulations that the author has them face.

Here in this tale by Ryan, are characters who jump from the page into your imagination as a feudal style system faces its darkest time where all the warriors have to fall back on is their honour.  Its well written, it has some solid twists and for me the action sequences really delivered as I made my way through the plotline.

Add to this solid dialogue and all round I was a satisfied reader when the final page turned.
at April 21, 2018