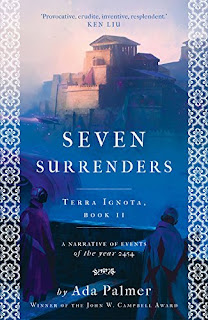 The Year is 2454.
The sun is setting on a hard-won golden age. For three centuries, humanity has enjoyed peace and prosperity fuelled by technological abundance, oracular data analytics, careful censorship... and just a little blood.
In a world dominated by seven factions, or 'Hives', the price of peace has been a few secret murders, mathematically planned to ensure political and economic balance. But now the secret is out, the balance is slipping and war beckons.
Convict Mycroft Canner knew this war was coming – he committed his terrible crimes to forestall it. Now, he has just one card left, a wild card no degree of statistical genius could have predicted: a thirteen-year-old child with the power to work miracles. Turning thought into matter, matter in life, this child has the power to save the world, or to doom it.


REVIEW:
When an author comes to the table with quite a unique tale you'll find that they either capture the reader or that they're thrown into a wary state of never going near it as the reviews can be can overly complicate a tale with all the hidden meanings and contexts that can  be drawn between the authors musings and the real world, but there are times when a book has such complexities that it raises more questions for the reader than it answers as well as gets them to question thier own standings and ethics.

Such is the case with this, the secon dbook from Ada Palmer.  Within its rich tapestry of world building, political intrigue and machinations are never far from the fore front with sequences that make you question life as well as how people act alongside seeing it through new eyes as he characters within seek to find thier own way and moral compass.  Its definitely a series that is quite deep philosophically and whilst its a fantasy in some respects, for others its more of a Sci-Fi epic.

Back this up with characters that make the world feel alive, dialogue that takes you from various points with ease alongside an overall arc that whilst at first appearing a little messy is full of little nuggets of info that will later come back to haunt you, so much so that a reread of the both books in the series after completing this, will allow you to pick up details that truly herald something pretty epic for the third outing.  Magical.