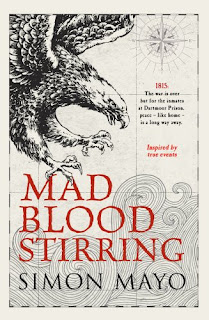 SYNOPSIS:
1815: The war is over but for the inmates at Dartmoor Prison, peace - like home - is still a long way away.

On the eve of the year 1815, the American sailors of the Eagle finally arrive at Dartmoor prison; bedraggled, exhausted but burning with hope. They’ve only had one thing to sustain them – a snatched whisper overheard along the way.

The war is over.

Joe Hill thought he’d left the war outside these walls but it’s quickly clear that there’s a different type of fight to be had within. The seven prison blocks surrounding him have been segregated; six white and one black. As his voice rings out across the courtyard, announcing the peace, the redcoat guards bristle and the inmates stir. The powder keg was already fixed to blow and Joe has just lit the fuse.

Elizabeth Shortland, wife of the Governor looks down at the swirling crowd from the window of her own personal prison. The peace means the end is near, that she needn’t be here for ever. But suddenly, she cannot bear the thought of leaving.

Inspired by a true story, Mad Blood Stirring tells of a few frantic months in the suffocating atmosphere of a prison awaiting liberation. It is a story of hope and freedom, of loss and suffering. It is a story about how sometimes, in our darkest hour, it can be the most unlikely of things that see us through.


REVIEW:
A different type of book from this author and one that takes the reader on one hell of a journey and whilst I'm not as familiar with the time period as I'd like to be, I did like the way that the tale brought to the fore with some believable characters living in limbo surrounded by atrocious conditions as arguments were forged as to their fate.

What Simon does well is give the people a voice and with the key characters feeling rounded, I did feel a fair few of the supporting cast were more 2d personalities rather than fully fleshed people.  This took me out of the story and when you're removed like that, it does take you a while to get back into.

Add to this dialogue that at times felt forced rather than organic and all round its more of a mediocre title rather than the star it could have been with a bit more background fleshing.  A shame but overall, a book I did feel showed a lot of promise and here's hoping that future outings will allow the author to make the adaptation from YA to Adult more smoothly.
at April 19, 2018