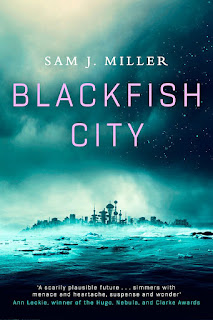 SYNOPSIS:
After the climate wars, a floating city was constructed in the Arctic Circle. Once a remarkable feat of mechanical and social engineering it is now rife with corruption and the population simmers with unrest.
Into this turmoil comes a strange new visitor - a woman accompanied by an orca and a chained polar bear. She disappears into the crowds looking for someone she lost thirty years ago, followed by whispers of a vanished people who could bond with animals. Her arrival draws together four people and sparks a chain of events that will change Blackfish City forever.
Disturbing, powerful and fearlessly imagined, Blackfish City is a mesmerising novel from a remarkable new voice in science fiction.


REVIEW:
To be honest this is a book that I wanted to love and whilst it was a real hard slog at the beginning due to the infodumps, I was pleased I persevered until the end as the characters developed well within their own isolated world where political greed and corruption seemed to have the winning edge in their society.

OK it is a dystopian Sci-Fi tale but it does feel that there is a lot of social commentary to be had from within the book that truly allowed the reader to see a world that many of us wish to view through blinkers.

All in, it was a solid enough read but for me all that information at the beginning made it a tale that I could easily have put down as I felt for quite a while that it wasn't for me.  Many will do and whilst that is a shame I suspect that future outings won't need to be quite as heavy on that side as all the leg work has been done which will allow Sam to concentrate more on the story and character development.  All in a solid start to a possible series.
at April 18, 2018