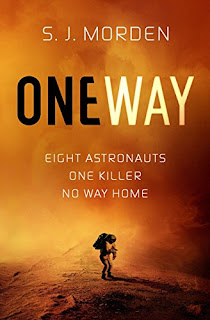 Andy Weir's THE MARTIAN meets Agatha Christie's AND THEN THERE WERE NONE.

There's a murderer amongst them, and everyone's a suspect . . .

Frank Kittridge is serving life for murdering his son's drug dealer, so when he's offered a deal by Xenosystems Operations - the corporation that owns the prison - he takes it.

He's been selected to help build the first permanent base on Mars. Unfortunately, his crewmates are just as guilty of their crimes as he is.

As the convicts set to work on the frozen wastes of Mars, the accidents multiply.

Until Frank begins to suspect they might not be accidents at all . . .


REVIEW:
As a reader I love to be taken on a journey within the tale and whilst in some of the crime stories out there its kept to a murder in a mansion, this tale takes murder to a whole other planet, in this case Mars,  as a group of convicts are allowed to serve their sentences building a livable environment on the red planet.

As people die off in accidents, suspicions are arisen and then a murder investigation is underway as one man tries to unravel it all before he's next on the murderers list.  The fact that Mars is uninhabitable helps give you a feeling of a small environment where characters are tripping over each other with very little privacy which when backed with a load of sciencey facts give this story a feeling that it could be grounded in reality.

Whilst in some parts I found the science side a bit heavy going with the explanations it did fulfill a job by helping you get to grips with the  planet and topography, this helps immensely in helping you suspend your disbelief and allowing you to full immerse.  All round a fun read and a book that a good few others will get a kick out of.  Cracking.
at April 10, 2018