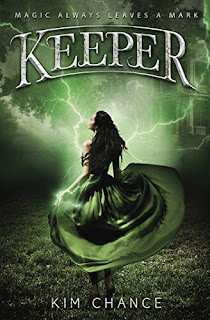 SYNOPSIS:
When a 200-year-old witch attacks her, sixteen-year-old bookworm Lainey Styles is determined to find a logical explanation. Even with the impossible staring her in the face, Lainey refuses to believe it—until she finds a photograph linking the witch to her dead mother.

After consulting a psychic, Lainey discovers that she, like her mother, is a Keeper: a witch with the exclusive ability to unlock and wield the Grimoire, a dangerous but powerful spell book. But there’s a problem. The Grimoire has been stolen by a malevolent warlock who is desperate for a spell locked inside it—a spell that would allow him to siphon away the world’s magic.

With the help of her comic-book-loving best friend and an enigmatic but admittedly handsome street fighter, Lainey must leave her life of college prep and studying behind to prepare for the biggest test of all: stealing back the book.


REVIEW:
A YA title that takes the reader on a journey of discovery as the principle character discovers that there's more to her life than she thought and that some secrets have consequences.  Its well written, the principle player is believable and above all else its a book that has twists and turns that will keep you guessing from the start as to which way the domino's will fall and how the consequences will play out.

Add to this some dialogue that works well, a good use of pace and prose and all round its a cracking book to keep you YA reader going.  As a series opener its solid and I for one can't wait to see what occurs next.
at April 09, 2018