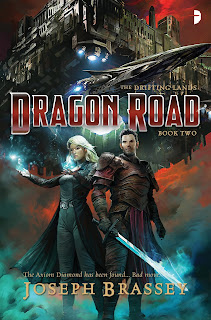 SYNOPSIS:
A murderous plot aboard a city-sized flying ship must be averted before a crazed cult sends a million people to their deaths When portal-mage Harkon Bright and his apprentice are asked to help select a new captain for the immense skyship Elysium, they quickly find themselves embroiled in its Machiavellian officer's court. Aboard the Iseult, the warlord Azrael, saved by his former enemies, struggles to adapt to his unexpected gift of life while suffering dark dreams of an ancient terror. As the skies darken and storm-clouds gather on the Dragon Road, the crew of the Elysium come face to face with deadly intrigues, plots from beyond death, and a terrible darkness that lurks in the heart of a thousand-year storm.


REVIEW:
The second book in Joseph's Drifting Lands series and one that really does deliver as our intrepid characters face adversity, distrust and a new crew member seeks to find his place in this city sized skyship.  Its definitely a book that works well with the plot line and when you throw into the mix characters that you want to spend time with political machinations alongside double dealing and backstabbing all round leaves the reader at times wondering which way is up and if those within seek the cities downfall rather than its continual existence as death threatens many aboard.

All round a great read and a title that more than kept me interested as I loved the concept and the explanations as to why the functionality alongside "science" of the ship which help make much more sense of things for me as a reader.

Finally throw into the mix a solid understanding of pace and it lets you breath just enough to prepare for the next endorphin filled scene.
at May 01, 2018