HISTORICAL FICTION REVIEW: THE BERNICIA CHRONICLES 1-3: The Serpent Sword, The Cross and the Sword, Blood and Blade - Matthew Harffy 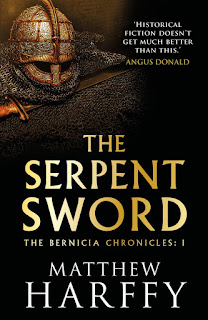 SYNOPSIS:
Beobrand is a young man with a shadowy past. As an outsider in the kingdom of Bernicia, he is compelled to join his brother, Octa, as a warrior in the household of King Edwin. He must learn to fight with sword and shield to defend the war-ravaged kingdoms of Northumbria.
In a period of great upheaval for Dark Age Britain, all he finds is death and war. Men and women strive to seize control of their destinies in a time of despair, and the land is rife with danger as warlords vie for supremacy and dominion. Amongst the blood and the betrayals, Beobrand learns of his brother's near-certain murder. Inexperienced but ruthless, Beobrand must form his own allegiances and learn to fight as a warrior with sword and shield.
Driven by a desire for vengeance and a relentless pursuit of his enemies, he faces challenges which transform him from a boy to a man who stands strong in the clamour and gore of the shieldwall. As he closes in on his kin's slayer, can Beobrand mete out the retribution he craves without sacrificing his honour... or even his soul?


REVIEW:
I love books that take me on an adventure and when they coincide with a landscape to which I'm familiar its not only easy to visualise but also helps you get your bearings but brings the tale to life as you can walk the landscape with the heroes of old.

The book is a solid treat for fans of Historical fiction and gives enough action to keep your heart in your mouth as this tale of vengeance alongside honour keeps the pages turning. Back this up with cracking prose, top notch sequences alongside an overall arc that furthers the characters development all round makes this a book that is hard to put down.

Finally throw into the mix the second title The Curse and Cross coming from Aria in November and you know that the wait won't be too long to see what else happens in our heroes timeline. Magic. 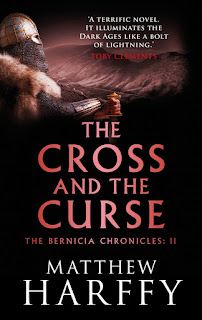 AD 634.
ANGLO SAXON BRITAIN.
Confusion and conflict continue as warlords battle across Britain to become the first King of the English.
After a stunning victory against the native Waelisc, Beobrand returns to a hero's welcome. His valour is rewarded by wealth and land by Oswald, King of Northumbria.
Exhausted, he retires to his new estate with his bride only to find himself surrounded once again by enemies old and new. With treachery and death on all sides, Beobrand fears he will lose all he holds dear.
On a quest for revenge and redemption, he accepts the mantle of lord, leading his men into the darkest of nights and the bloodiest of battles.
The Cross and the Curse is the second gripping, action-packed instalment in The Bernicia Chronicles.

REVIEW:
Following on from The Serpent Sword, this the second book works wonderfully well, with emotional drama, top notch action sequences, character growth and of course consequences for actions taken.

Throw into this a pace that gives you just enough space to grab a breath and all round I was a more than happy reader.  A pure joy to read. 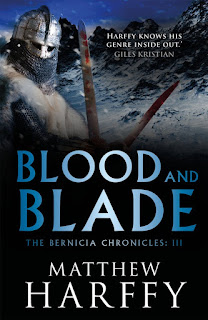 Oswald is now King of Northumbria. However, his plans for further alliances and conquests are quickly thrown into disarray when his wedding to a princess of Wessex is interrupted by news of a Pictish uprising.
Rushing north, Oswald leaves Beobrand to escort the young queen to her new home. Their path is fraught with danger and uncertainty, Beobrand must try to unravel secrets and lies if they are to survive.
Meanwhile, old enemies are closing in, seeking brutal revenge. Beobrand will give his blood and blade in service to his king, but will that be enough to avert disaster and save his kith and kin from the evil forces that surround them?
Blood and Blade is the third gripping, action-packed instalment in the Bernicia Chronicles.


REVIEW:
The third book in the series and one that continues to build the principle character wonderfully as events from the previous novel are still taking their toll physically and mentally.  As with the previous the world building is wonderfully done, easy to visualise and when you throw in cracking combat alongside a kickass plot line all round makes this a book that is, like the previous hard to put down.

Add to this, lessons that have been clearly learned with some well done authorly tricks alongside a cracking understanding of prose all round make this a series that I've thoroughly enjoyed.  I now have the fourth part to look forward to in December but for me, a re-read will be happening prior to that.  Provided I can half hitch my books back from my Dad who is getting just as much fun from them.