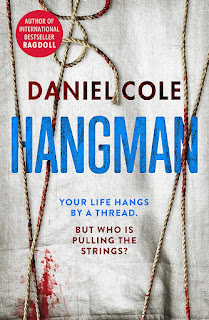 
The new thriller from the bestselling author of Ragdoll
A detective with no one to trust
A killer with nothing to lose
18 months after the 'Ragdoll' murders, a body is found hanging from Brooklyn Bridge, the word 'BAIT' carved into the chest.
In London a copycat killer strikes, branded with the word 'PUPPET', forcing DCI Emily Baxter into an uneasy partnership with the detectives on the case, Special Agents Rouche and Curtis.
Each time they trace a suspect, the killer is one step ahead. With the body count rising on both sides of the Atlantic, can they learn to trust each other and identify who is holding the strings before it is too late?


REVIEW:
I love a crime novel that delivers not only on high octane thrills but also delivers characters that you want to spend time around and whilst thats what happened for me with Daniel's first book, Ragdoll, this one felt that it was a bit flat compared to it, with sadly poor character development for me and a plot line that whilst Ok, wasn't up to the standard I was expecting.

Whether this was due to the second book syndrome that some authors suffer I don't know but for me, without that development, I don't have the hook with the character and don't really care as to what happens to them.  That takes a lot of the thrill and of course endorphins away from the reader as they make thier way through the book.

All round, Daniel is an author that I will spend more time with in the future but for me, with this book being more of an OK title, its not one that will hit my top recommendations for the year and stand out from the competition like his original did.  A great shame.