FANTASY REVIEW: The Sond of the Shattered Sands 3: A Veil of Spears - Bradly Beaulieu 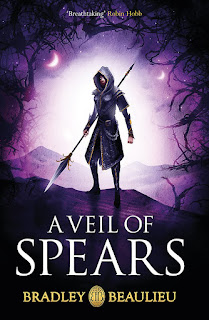 The Night of Endless Swords nearly saw the destruction of Sharakhai, and since then the Kings have come down hard on the rebelloious Moonless Host. Hundreds have been murdered or given to the Confessor King for questioning. Hundreds more have fled. Including Çeda, who has discovered that Onur, the King of Sloth, has returned to the desert to raise an army and challenge the remaining kings.
The Moonless Host - who have taken to calling themselves the Thirteen Tribe - will be trapped between Onur's growing influence and the considerable might of the kings who, with Sharakhai firmly back under their rule, are turning their attention to the desert once more.
Çeda knows that the asirim are the key. If she can lift their curse and free them from their bondage, then they can save Thirteenth Tribe from the the squabbling kings . . . and perhaps the kings themselves are no longer as unified as they once were. As they vie against each other for control of the city, could Çeda make an ally of one of them? And which one, when any of them could betray her as easily as they would their fellow kings.
Whatever the solution, the end is coming: as Çeda focuses on freeing the asirim and weaken the kings' hold on Sharakhai, the kings' forces, the scheming queen of Qaimir, Hamzakiir the ruthless blood mage, and the thirteenth tribe all prepare for a grand clash that may decide the fate of all who sail the desert.


REVIEW:
The third book in the series and remembering that the second jumped straight in from where the original left off I pretty much expected the same with this the conclusion to the trilogy.  Which to be honest was just as well I did as from the start, the book never let up with its top notch pace and plot lines that you had to pay attention to.

However the best bit about the book, is the way that the principle characters have changed over time, they've grown, they've expanded and been affected by previous choices which feels not only organic but a sign that the author has really worked hard to keep the book not only consistant but developed in such a way that you can't help but care as to their fates.


All round a wonderful read and an author I'll be returning to in the future with pure joy.  Magic.