SCI-FI REVIEW: Rise of the Jain 1: The Soldier - Neal Asher 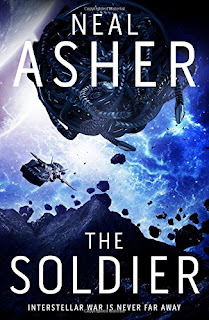 Her mission is vital. Her failure is unthinkable.
A corner of space swarms with alien technology, a danger to all sentient life. It’s guarded by Orlandine, who must keep it contained – as it could destroy entire civilizations. An alien intelligence shares her vigil. But she doesn’t share everything with Dragon . . .
Orlandine is hatching a plan to obliterate this technology, removing its threat forever. For some will do anything to exploit this ancient weaponry, created by a long-dead race called the Jain. This includes activating a Jain super-soldier, which may breach even Orlandine’s defences.
Meanwhile, humanity and the alien prador empire also watch this sector of space, as neither can allow the other to claim its power. However, things are about to change. The Jain might not be as dead as they seemed and interstellar war is just a heartbeat away.
The Soldier is the first novel in the Rise of the Jain series, by bestselling science fiction author Neal Asher.


REVIEW:
I've been a fan of Neal's writing for years as I love the way he brings high octane action ot the fore with cracking characters, complex ideologies as well as a carefully crafted universe for everything to occur within.

In this the latest work set in his Polity Universe we get to see things from the point of view of a cracking principle character, I love the way that he gives them human traits that allow you as a reader to get a hook into them and care about thier fate which when backed with solid prose and good dialogue makes this space opera a great read and one I've recommended to quite a few people.