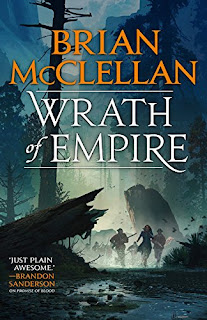 SYNOPSIS:
The country is in turmoil. With the capital city occupied, half a million refugees are on the march, looking for safety on the frontier, accompanied by Lady Flint's soldiers. But escaping war is never easy, and soon the battle may find them, whether they are prepared or not.
Back in the capital, Michel Bravis smuggles even more refugees out of the city. But internal forces are working against him. With enemies on all sides, Michel may be forced to find help with the very occupiers he's trying to undermine.
Meanwhile, Ben Styke is building his own army. He and his mad lancers are gathering every able body they can find and searching for an ancient artifact that may have the power to turn the tides of war in their favor. But what they find may not be what they're looking for.


REVIEW:
Another cracking novel from a favourite author who not only brings guns to the fore in his fantasy world but also brings complicated political situations whilst cleverly weaving action sequences into the book.

Its high octane moments have you running for cover with your favoured heroes, the politicla machinations have you wondering how its going to be twisted and when enemies move alongside counter strike, it really keeps you glued page after page.

Throw into the mix, characters that continue to grow through the ordeal's that they've undergone alongside living with choices they've made, all round makes this a series that I really can't find fault with.  A magical read and one I'd heartily recommend to other fantasy fans.