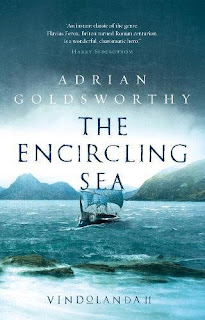 SYNOPSIS:
From bestselling historian Adrian Goldsworthy, a profoundly authentic, action-packed adventure set on the northern frontier of the Roman Empire.
AD 100: VINDOLANDA.
A FORT ON THE EDGE OF THE ROMAN WORLD.
Flavius Ferox, Briton turned Roman centurion, is charged with keeping Rome's empire intact. But from his base at Vindolanda on the northern frontier of Britannia, he feels enemies closing in on him from all sides.
Ambitious leaders await the chance to carve out empires of their own. While men nearer at hand speak in whispers of war and the destruction of Rome.
And now new threats are reaching Ferox's ears. Stories about the boat-dwelling men of the night, who have cursed the land and only come ashore to feast on men's flesh.
These are just rumours for now. But Ferox knows that rumours stem from truth. And that no one on this isle is safe from the great, encircling sea...


REVIEW:
Adrian has been a writer on the roman military for quite some time so after enjoying his first fictional outing in Vindolanda (the first of the series) Ias well as having come from the area where it was based, I was more than looking forward to the second outing and seeing how the discoveries on the wall about soldier life, would translate into his work.  (I have fond memories of a letter that translated to "send more beer.")

Whilst the books are set prior to the building of Hadrian's Wall (about 22 years before), I fell in love with the characters and of course getting to see the area through the eyes of visitors from afar.  So with the second installment burning a hole in my TBR pile, I just had to pick it up.

What this book brought to the fore was Adrian's research, solid understanding of the time period and of course making sure that the history was accurate and sadly that's all it brought.  The book and characters were forced into situations, it felt more like a middle book where nothing really happened as if to fill a contract for three titles and at the end, I was left wondering why so much extra fluff was added when it needed more character driven choices as well as plot points.

Add to this dialogue that didn't feel that it came from the same cast that were in the original and a rather lack-lustre pace, all round left me feeling that this book was short of the mark for me as a reader.  I will try the third part hoping that it will pick up the pace as well as getting back to the characters but the way that I feel at the moment, the tale is meh rather than more.