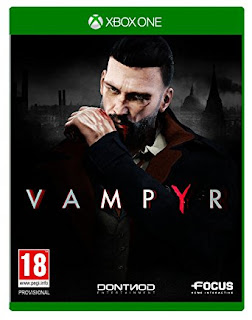 SYNOPSIS:
Prowl the disease ridden streets in Vampyr - a darkly atmospheric action RPG from the studio behind 'Remember Me' and 'Life is Strange', developed using Unreal Engine 4.;Set in early 20th century Britain during a bout of the lethal Spanish flu, the streets of London are crippled by disease, violence and fear. In a completely disorganized and ghostly city, those who are either fools, desperate, or unlucky enough to walk the streets lay prey to Britain's most elusive predators: the Vampires. Emerging from the chaos, a tormented figure awakes. As the player it is you who determines how to harness your new powers, by specializing in deadly, versatile RPG skill-trees that change the way you play. As a doctor recently turned into a Vampire, you try to understand your new affliction. Your quest of intuition, discoveries and struggles, will be filled with death and drama, while your attempt to stem the irrepressible thirst that constantly drives you to take human lives. As you cling to what remains of your humanity, your decisions will ultimately shape the fate of your hero while searching for answers in the coughing, foggy aftermath of the Spanish Flu.


REVIEW:
OK, so Vampyr has been out for just over a week and with E3 taking a lot of people's attention, I've been hard at work playing my way though the game and wanted to review and address a number of things with the title, there's some great points with the game and for me, one incredibly annoying one that could be not just a stumbling block for a number of people but may well cause a great many to quit prematurely.  But we'll come back to that later in the review.

Firstly I want to say that I loved the premise of the game, a newly turned vampyr doctor seeks to find the cause and a cure for the 1918 Spanish flu pandemic with an urban fantasy cause.  Its solid writing, the casting worked very well for me which when added  to dark, dreary deserted streets of the early 20th Century London alongside a haunting score all round makes the elements work wonderfully well together.

The supporting cast adds extra layers and with the Pembroke Hospital having military tents set up outside also adds another layer of authenticity to the game.

Within the title, players have a great many choices to make, who will live, who will die, is that person expendable for extra XP to make your life easier or do you want to play the virtuous doctor and leave everyone alive bar those who attack you.  (This secondary route adds extra layers of difficulty to the game as it takes a long time to get enough to boost your skills.)  Its tricky and with each character having additional layers and at times, hidden clues to quests, all round means that regardless of who they are and what drives them, not everything is as simple as you may originally think.

Add to this a solid choice of weapons and limited upgrade materials all round makes your choices pretty crucial and at times tricky as a wrong option can punish you quite harshly.  (Personally my main weapon of choice was the two handed barbed cudgel.)  Each choice has consequences and can close off lines of enquiry so much so that some of the sub quests become impossible to fulfill.

Right so now we've addressed a lot of the game, its now time to address my main problem, when battling the Sewer Dog, I found the lighting to be a real pain, during the fight I was spending more time trying to change the camera angle because i was blinded by the light reflecting from the water which in turn caused me to die quite a few times.  It was infuriating and for many gamers may well cause them to put the title in frustration.  I'm hoping that a future patch will fix this problem but for now its more than annoying.

Don't get me wrong, I've had a lot of fun playing this game but at the end of the day, when something so simple as this takes you not only out of the moment but angers you because your death was due to not being able to do anything because you can't see whats happening let alone evade it will cause a number of people to put it down and not return.

All round it is a solid title and whilst in some respects I think that the area's could have been expanded upon a bit more with perhaps some quick travel points adding (as to get anywhere you're running through numerous locations each time you wanted to get to a new mission location, did cause things to slow down quite a bit) it is a game that quite a few people will enjoy, here's hoping that perhaps next time we can have an option for a female protagonist and perhaps visiting say Paris during the revolution which could add more alternate history and a deeper flavour to this world.