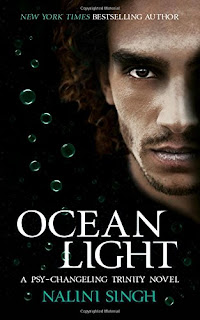 SYNOPSIS:
New York Times bestselling author Nalini Singh dives beneath the surface of her Psy-Changeling world into a story of passionate devotion and selfless love . . .

Security specialist Bowen Knight has come back from the dead. But there's a ticking time bomb in his head: a chip implanted to block telepathic interference that could fail at any moment - taking his brain along with it. With no time to waste, he should be back on land helping the Human Alliance. Instead, he's at the bottom of the ocean, consumed with an enigmatic changeling . . .
Kaia Luna may have traded in science for being a chef, but she won't hide the facts of Bo's condition from him or herself. She's suffered too much loss in her life to fall prey to the dangerous charm of a human who is a dead man walking. And she carries a devastating secret that Bo could never imagine . . .
But when Kaia is taken by those who mean her deadly harm, all bets are off. Bo will do anything to get her back - even if it means striking a devil's bargain and giving up his mind to the enemy.


REVIEW:
It's no secret that I've not been the biggest fan of some of Nalini's previous titles but this one seems to be back on the money giving the readers what they want as well as exploring some new area's that have been teased at in previous outings.

As you'd expect the characters are what really sells the books and lets face it a bit or romance with a person who is not completely of this world is a dream for many.  The story is engaging, the plotline wonderful and whilst some typical Urban Fantasy alagories do make appearances, the dialogue and bonding of the principle players is what sells it.

All round a welcome return to form for me and I really look forward to seeing what will occur in future outings especially if we get to delve more into the unknown cultures within her world.