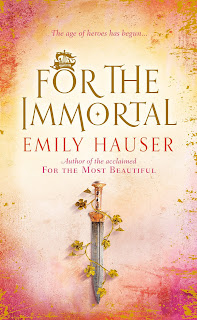 SYNOPSIS:
Thousands of years ago, in an ancient world where the gods control all and heroes fight to have their names remembered down the ages, two extraordinary women become entangled in one of the greatest heroic tales of all time . . . and must face how much they are willing to risk for immortality.

Desperate to save her dying brother, Admete persuades her father, the king of Tiryns, to let her join Hercules on one of his legendary twelve labours. Travelling to the renowned female warrior Amazons in search of a cure, Admete soon discovers that both Hercules and the fearsome Amazons are not as they first seemed.

The Amazons greet the arrival of the Greeks with mixed feelings – and none more so than Hippolyta, the revered queen of the tribe. For Hercules and his band of fighters pose a threat to her way of life – but also stir up painful memories that threaten to expose her deepest secret.

As battle lines are drawn between the Greeks and the Amazons, both women soon learn the inevitable truth – in war, sacrifices must be made; especially if they are to protect the ones they love most . . .


REVIEW:
To be honest I'm new to Emily Hauser and when I saw the premise I was more than intrigued as I remembered a part of it being used as back story in the recent Wonder Woman film.  However upon receiving it and learning that it was the third part in a trilogy I was a little upset as I hadn't read the other two and worried that I wouldn't get everything out of it that I should do.

What occurred within was, for me, a book that can be read as a standalone without leaving you feeling that you're missing anything from the previous two.  The characters are rounded and whilst the males are all detestable (which to be honest I suspect that they probably were in that time period) the female protagonists came across very well.  I liked the dialogue, loved the way that thEIr interactions spoke volumes as to their goals and drive alongside admiring the way that the story was very organic despite falling back into mythology.

All round, it was a book that I really enjoyed spending time with and I will be picking up the earlier two novels to get the full flavour and have already added Emily to my TBR list for future endeavours.  Magic
at June 24, 2018