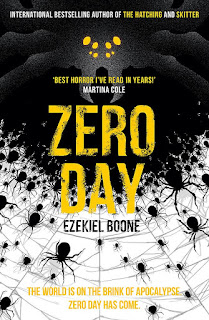 The world is on the brink of apocalypse. Zero Day has come.
The only thing more terrifying than millions of spiders is the realization that those spiders work as one. But among the government, there is dissent: do we try to kill all of the spiders, or do we gamble on Professor Guyer's theory that we need to kill only the queens?
For President Stephanie Pilgrim, it's an easy answer. She's gone as far as she can-more than two dozen American cities hit with tactical nukes, the country torn asunder - and the only answer is to believe in Professor Guyer. Unfortunately, Ben Broussard and the military men who follow him don't agree, and Pilgrim, Guyer, and the loyal members of the government have to flee, leaving the question: what can be more dangerous, the spiders or ourselves?


REVIEW:
Having read the previous novels I was wondering how the whole thing was going to go and to be honest I have to say that I felt a little bit short changed with this tale as it felt that it was more a conclude the main arc and leave supporting cast members arcs unfinished which for me made it a bit cheap.

Don't get me wrong, the first book was a great kick off but with this last one, it felt more of a damp fizzle than a good explosion that I was expecting.  Sadly as the books have gone on, the pace has slowed and in certain places become a little predictable and if I'm honest could have been cut down quite a bit to be more of a novella or perhaps finished the story in two books rather than the third and would have been tighter for it.