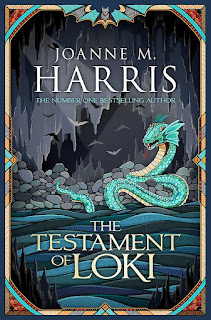 Ragnarok was the End of Worlds.
Asgard fell, centuries ago, and the old gods have been defeated. Some are dead, while others have been consigned to eternal torment in the netherworld - among them, the legendary trickster, Loki. A god who betrayed every side and still lost everything, who has lain forgotten as time passed and the world of humans moved on to new beliefs, new idol and new deities . . .
But now mankind dreams of the Norse Gods once again, the river Dream is but a stone's throw from their dark prison, and Loki is the first to escape into a new reality.
The first, but not the only one to. Other, darker, things have escaped with him, who seek to destroy everything that he covets. If he is to reclaim what has been lost, Loki will need allies, a plan, and plenty of tricks . . .


REVIEW:
A wonderful book from an author who not only gives the reader a cracking read but does so with cracking humour and demonstrates that her talents translate wonderfully from the YA field into adulthood with this top notch title.

The characterisation works on so many levels, the characters with foibles and flaws which when added to the way that Joanne tackles the various complications makes the read even more entertaining.  Back this up with a top notch plot and prose that just stick in the mind all round make this a top notch read that you have to have on your shelf.