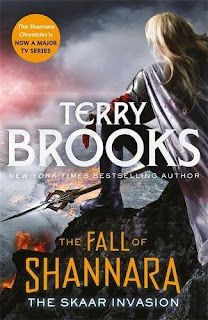 SYNOPSIS:
Following The Black Elfstone comes the second book in The Fall of Shannara - the epic four-part conclusion to the Shannara series from one of the all-time masters of the fantasy genre.
Tensions in the Four Lands are high. The mysterious force that laid waste to Paranor has revealed a more human face. While some gain a new understanding of the invaders and what they are after, others continue their existing quests even as the peril rises. For what looked to be a formidable invading force proves only the forerunner of a much vaster army - one that is now marching against the Four Lands in all its fury.


REVIEW:
The second book in the Fall of Shanarra series and muddies the waters wonderfully so that the reader isn't quite sure whether the Ohmsford is what the worlds needs or fears.  Its quirky, its a tale that works wonderfully well for me and whilst there are some problems with pacing in the story, the way that it develops feels organic generating a story that was a huge amount of fun to read.

Add to this, solid prose, dlalogue that works well and all round I was a more than happy reader, here's hoping that book three doesn't feel like a filler for the conclusion in book four and continues to develop the overall arc with the characters.  Top notch.
at June 21, 2018