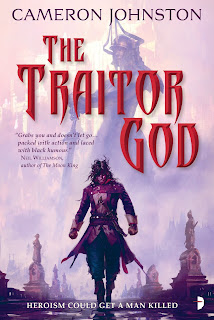 SYNOPSIS:
A city threatened by unimaginable horrors must trust their most hated outcast, or lose everything, in this crushing epic fantasy debut. After ten years on the run, dodging daemons and debt, reviled magician Edrin Walker returns home to avenge the brutal murder of his friend. Lynas had uncovered a terrible secret, something that threatened to devour the entire city. He tried to warn the Arcanum, the sorcerers who rule the city. He failed. Lynas was skinned alive and Walker felt every cut. Now nothing will stop him from finding the murderer. Magi, mortals, daemons, and even the gods - Walker will burn them all if he has to. After all, it wouldn't be the first time he's killed a god...


REVIEW:
Fantasy is a genre that many people think of as quite simplistic falling into the "there's a hero, he goes out, kicks some butt and that's about it" camp or "Its Elves, fairies and shit isn't it?"  Well sorry to disappoint but we've evolved as a genre, yes we do still have that sort of stuff but then you get kickass titles like this debut from Cameron Johnston who gives the reader a book of vengeance, high octane action, political double dealing and overall characters that really help to drive not only the story but the world involved forward.

The pose is solid enough and the world is definitely one of interest but for me, its the characters that stand out.  I loved the principle hero who whilst dislikeable at the beginning demonstrated the complexities of his situation who whilst seperated from a lot of others within due to his abilities, also has a caring side alongside being distanced.  Its well done, brings a lot of differing aspects to the fore and for me, I loved every minute of it.

All round a cracking debut and with a few twists and turns is a book that I hope will lead on to others for the author as I really did get a lot from it.  Magic.