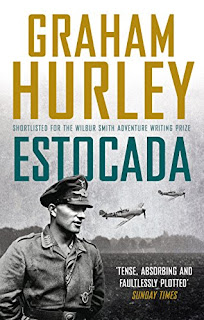 1937. Dieter Merz is the Reich's most celebrated fighter ace. Flying for the infamous Condor Legion over the battlefields of Spain's civil war, Merz has been able to unleash the full potential of the Luftwaffe's new fighter against his Republican opponents. In Dieter's hands, the Messerschmitt Bf-109 is as graceful as a matador's killing strike: la estocada.
Dieter's aerial prowess has brought him into close contact with the top echelons of the Nazi regime. He is not a political man — all he wants to do is fly – but for how long can he deny the toxic nature of Hitler's rule?
Scotsman and ex-marine Tam Moncrieff is recruited by a nameless intelligence agency in London to go to Germany and sound out Hitler's resolve. Does he really intend to invade Czechoslovakia? Do his generals support him? Can the march to war be stopped?
As duty collides with conscience, fate will bring both men together. These are desperate times calling for desperate measures. To avoid war a killing strike is needed: la estocada.
The question is, who is the matador, who is the bull?


REVIEW:
Graham Hurley is an author who always brings his thrillers to the fore with indepth characters who feel fully formed and believable for the story.  They have foibles, they have strengths and of course when they speak the words feel organic rather than something that is being used to drive plot forward to force a situation.  It's always something he does well and in this title really helps being the situation to the readers mind in crystal clarity.

Add to this a solid plot, good use of prose and a cracking overall arc that really keeps you glued as each of the pages turn regardless of which side of the conflict the characters are on.  All round another solid story and one that I've not only enjoyed but passed onto my grandfather who is not only making his way through it currently but loving it, a true compliment from a very fussy reader indeed.